Toronto Dance Theatre is one of Canada’s leading dance companies, recognized for the intelligent, provocative vision of its choreography and the exceptional artistry of its dancers.

Founded in 1968 by Peter Randazzo, Patricia Beatty and David Earle, and under the artistic direction of Christopher House since 1994, Toronto Dance Theatre has produced a remarkable body of original Canadian choreography. The company has had– and continues to have– a profound influence on the development of dance in Canada.

Christopher House is one of Canada’s “most enduringly inventive choreographers” (National Post). His works are acclaimed for their rich movement invention, subversive wit and deft handling of multiple layers of meaning. TDT’s dancers are remarkable artists who play an essential role in the creative process: they are celebrated for their powerful physicality, imaginative daring and sensitive, playful ensemble work.

Under House’s direction, the company has opened its doors to collaborations with international artists including the iconic American choreographer Deborah Hay. Initiatives such as the Berlin/Toronto Project (2009) and the Paris/Toronto Project (2011) bring stimulating new perspectives to the Toronto dance scene. The choreographic showcase Four at the Winch and the discussion series The Process Revealed are designed to facilitate an exchange of ideas between artists and the audience, and TDT’s Education program offers a wide variety of dance experiences for young audiences.

Toronto Dance Theatre performs annually at Toronto’s Harbourfront Centre and at the company’s own Winchester St Theatre in Cabbagetown, where it shares a home with the affiliated School of Toronto Dance Theatre, Patricia Fraser Artistic Director. The company maintains a regular presence from coast to coast in Canada, and has toured extensively in the USA, Europe and Asia. 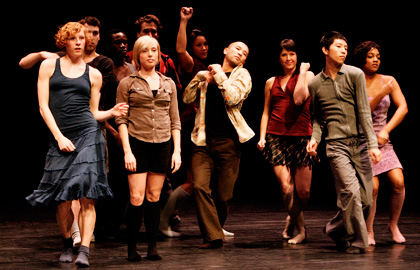