Sumac converted all our historical data records, from several sources. In less than a week we were up and running, sending and tracking newsletters to our newly consolidated list of constituents. Sumac has made our communication and fundraising efforts more effective and much more efficient. In fact I think it paid for itself in the first week. – Michael Wallace, Executive Director of Theatre Museum Canada

Theatre Museum Canada began in Vancouver in 1982 when Theatre Research in Canada (then called Theatre History in Canada) recognized the need for a theatre museum. The idea was championed by a few key people, including producer/director/designer Jean Roberts, and the drama critic for Toronto’s Globe and Mail, Herbert Whittaker.

In 1991 The Theatre Museum Corporation, was established. Its mandate was to collect, document, preserve, study, display and interpret the heritage of theatre in Canada, and to enhance the public appreciation of the historical context of theatre in Canada.

While a physical site is still in the future, Theatre Museum Canada has enlisted the support of key members of the theatrical community and continues to gain momentum and enlarge its collection. It has also evolved with the times, recognizing the value of a virtual site, which can bring together the theatrical experiences of each region in the country. 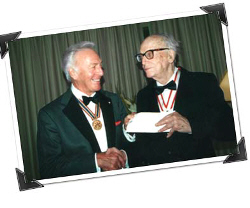