How to Win Back Lapsed Donors

On average charities lose 15-20% of their donors each year from deaths, old age, retirement or change in financial status. Another 14% move each year but few bother to notify their charity. Finally, 10-15% stop responding due to disinterest, annoyance at the charity or at someone in the charity.

Some may have outgrown their current relationship with the charity and found another charity they feel is more worthy. Others stop due to a job loss or change of circumstances or simply because someone misspelled their name or address.

These are “lapsed donors”—people who made a gift at one time but after repeated solicitations, simply don’t give again.

Pick Up The Phone

Now, let’s look at positive ways to handle this. If a long-time or high-dollar donor stops their support, the person responsible for fundraising should immediately pick up the phone and find out why. Perhaps there is something going on in the donor’s world that has created this interruption in their support or they may have become disillusioned by a miscommunication.

However, if the person responsible for fundraising, or others directly involved with the charity, do not have a personal or close relationship with these donors then the question becomes: How do you win these important donors back?

Here are some suggestions that have worked well:

1. First of all, keep in mind that it costs less to reactivate lapsed donors than to recruit new donors. Think in terms of Return on Investment and lifetime customer value lost. Review your donors and gift histories, identifying the best donors for recapture, such as multiple or consecutive year givers

2. Donors whose last gift was under $10 or who only gave one gift in 60+ months should be avoided, they will likely draw a low response.

3. Select only those high value donors who have not given for 2, 3 or 4 years and send them direct mail specifically created for them.

4. You could even send them a survey to try and find out why they have stopped responding.

Any specially created piece should:

Examples of approaches that have worked

The Royal Conservatory of Music
Their house membership list of 50,000 had been dormant for several years. After scrubbing (cleaning up the list) a membership appeal was sent to 5,586 members in the $100 to $999 range and 203 members in the $1,000 to $25,000 range. It resulted in a renewal win-back rate of 70%. One of the key strategic points was an option to become a member whenever they chose to do so.


The Audubon Society of Rhode Island
They used a “forgiveness” appeal with their members and generated a 50% renewal win-back rate. To view, click on link featured on SOFII here.

They used the following strategy: 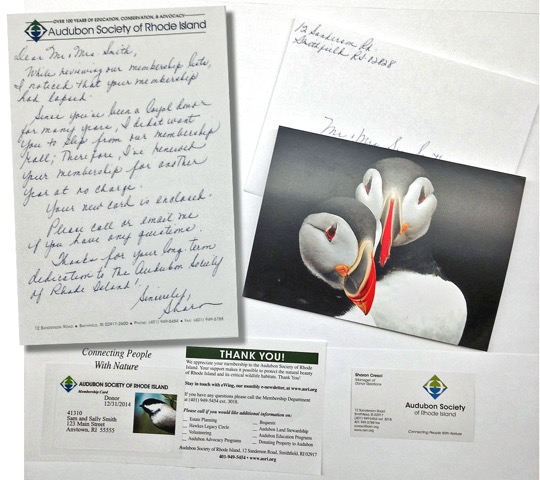 The United Way in Montreal
They reached out to all the people who had not given for 5 years or more. The survey renewal win-back rate was just 1% but, more important, those who could no longer give responded candidly, giving reasons why they could no longer afford to donate.
And that is valuable as it saves you the expense of mailing to them.


If you decide to include a survey, here are some suggestions: