Have you ever heard this saying: “There are lies, damned lies and statistics?” That was Mark Twain. It came to mind after reading an article published by the CBC, called “Charities Paid $762M to Private Fundraisers.”[1] The article reported on an investigation conducted by CBC into “your charity dollars,” particularly the amount of money that goes to private fundraisers.

While the CBC certainly didn’t lie in the article, they did manage to paint a very grim picture of the entire nonprofit sector in Canada using a few shocking examples of overspending.

The article starts out with a broad statement about all charities in Canada: “Canadian registered charities paid $762 million to third-party fundraisers between 2004 and 2008,”[1] but then focuses entirely on a few who spent ridiculous amounts of money on external fundraisers, leaving practically nothing for their causes.

The article states that CBC “found examples in nearly every province in which local, provincial and national charities for years spent upward of 70 or 80 per cent of their revenues to pay the companies that organized their fundraising drives.”[1] Here are the three examples they give:

What the CBC fails to make clear in the article, however, is the small percentage of charities that these examples represent. If you look closely at the statistics and do a quick calculation, you realize that the CBC is not talking about the majority of charities in Canada. They are not even talking about 10% of charities. What they are actually talking about is a miniscule 0.2% of charities.[2] So, the story is actually a good one – that 99.8% of charities spend responsibly and do a lot of good with that money. But the article is very misleading. Because of the way the facts are presented, the message that we take away is a bad one. 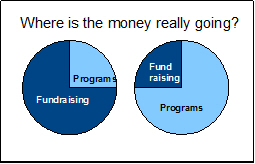 Also misleading is the comparison between what charities spent on private fundraisers and what they earned, as pointed out by the AFP: The article compares what charities spent in four years ($762M) with what they earned in just one year ($8.2B).[3] At first glance, those numbers are shocking, but if we get the comparison right, what we are actually looking at is $762 million used to raise something more like $32.8 billion, which is not at all shocking. It’s just the cost of raising money.

Unsurprisingly, the CBC investigation and article has fueled a lot of debate and backlash. The article itself has to date received 869 comments. Soon after publication, the Association of Fundraising Professionals released an official response to the CBC, and both the Canadian Red Cross and Crime Stoppers have replied defending their spending.

It’s unfortunate, but articles like this have given donors a bad taste in their mouths and they are going to become more inquisitive about how funds are used. It is your job now to separate yourself from these bad examples that make it into the media. Be prepared. Be transparent. Show donors exactly where funds are going.

[2] According tot he articles itself, only 214 of the 85,000 registered charities listed on the CRA’s website used external fundraisers and paid more than 50 per cent of what they earned to them (that’s 0.2%). CBC News. Charities Paid $762M to Private Fundraisers. September 22, 2010.

We’ll get you setup fast with a database you, and all your nonprofit staff can access from anywhere!