Non-profit advertising is unique. While the purpose of commercial ads is to sell a product, non-profit ads need to be able to help people understand a specific problem, evoke empathy, and a desire to help. Unfortunately, a lot of non-profit ads fall short on all three counts.

You’ll find many of these ads on Jeff Brooks’ popular Future Fundraising Now Blog, in a post called Stupid Nonprofit Ads. Brooks’ posts and commentary, which are harsh at times, point to ad agencies as the culprit, and he makes a good case.

Commercial ad agencies seem to get it all wrong when it comes to non-profit advertising. They focus too much on being clever and not enough on reality. What we end up with are ads that use tactics like abstraction, humour and imagery, which work well to sell products, but create ads that are far too removed from reality to evoke the necessary understanding and empathy to sell a cause.

Here are a few less than inspiring examples that we hope will help you better understand these tactics and why they fail. We’ve also included one very good example to show you how, if you avoid the lure of the ad agency, you can get it just right.

Abstraction is a common tactic used by ad agencies. It allows them to embed impractical ideas – something visionary and unrealistic – into advertising. Brooks is obviously not a fan. He says: “I’ve been in the fundraising business a long time. I’ve seen thousands of projects from the inside. And every time – yes, every time – a project has used cleverness and abstraction as its platform, it has failed. I’m not talking slight under-performance, but spectacular and utter failure.” 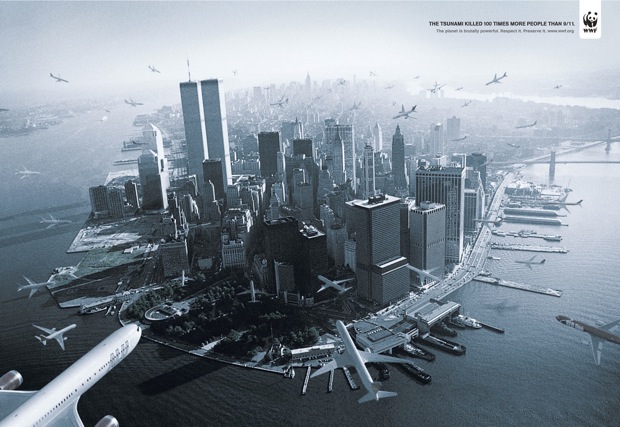 The text of this ad reads: “The tsunami killed 100 times more people than 9/11.” The hundreds of planes in this image are undoubtedly supposed to symbolize how much larger a catastrophe 9/11 would need to be to compare to the tsunami in the Indian Ocean.

This ad does not only fail because of poor taste – consider the reaction of the millions of people affected by the 9/11 disaster when they see someone trying to raise money in this way – but because the ad agency’s use of abstraction results in a ad that is so bizarre, obscure and unrelated to the actual catastrophe, that it fails to evoke empathy for the actual people affected. Using real pictures of the devastation left behind after the tsunami would have been far more compelling!

Here’s another example of abstraction in advertising from the WWF: A video called Why campaign with us? While this video is definitely entertaining, abstraction makes it ineffective says Brooks. “When you write a letter, it’s an act of communication. It goes somewhere and is read by somebody, who, we hope, takes a proper action as a result… Your letter is not a big colorful domino that starts knocking over other colorful dominos.” Reality, he says, “boring old literal reality of people making the world a better place in specific ways – is far more compelling. And far more likely to motivate people to action.”

Humour is another tactic often used by ad agencies. It doesn’t really work well for non-profits though, because it results in a less compassionate state of mind than empathy, which is where you’d like your audience to end up. Check out this advertisement from the folks at Movember.

Movember is a great cause, but they really missed the mark on this ad. Again, the ad agency has focused too much on being clever and not enough on reality. According to Brooks: “In all their creativity, they missed the central fact that prostate cancer is a terrible thing. It’s not a goofy costume – it’s a real-life disease that hurts and kills men.”

Lastly, ad agencies seem to be a big fan of using imagery in advertising – using an image to create a mental perception that is similar to reality. The problem is, it doesn’t always get us as close to reality as we’d like for a non-profit ad to be effective. Take this example: 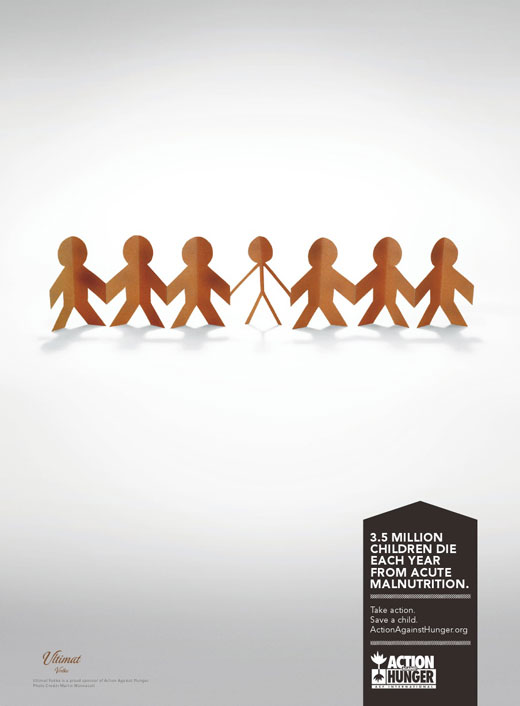 The ad agency made a big mistake when they decided to use paper dolls as a symbol for malnourished children, rather than showing the faces of real children. In order to feel empathy and be compelled to act, we need to be able to identify with a real person, dealing with a real problem. Paper dolls just don’t cut it.

Getting It Just Right

In order to create a really effective non-profit ad, take Brooks’ advice and don’t try to be clever. “When an ad agency comes to you pitching their wares: Just say no!” he says. Tactics like abstraction, humour and imagery take the viewer away from reality, and in order to make your non-profit ad effective, you want to do the exact opposite!

You need to take individuals into the world of the people in need, showing them the problem as it is, the real people affected and exactly what they can do to help. Here’s a great example from Oxfam that that does just that: Sufia’s story: climate change in Bangladesh

For more examples of non-profit ad blunders, check out Brooks’ Blog: Stupid Nonprofit Ads and the Donor Power Blog for even more examples.

Included in the Premium Memberships Package:

Included in the Standard Memberships Package:

Donations flow from your website forms straight through payment processing and to your database, so there's less effort and less errors.

Included in the Basic Memberships Package: