A Picture is Worth a Thousand Donations: How Pictures Cause Donors to Act

Pictures can be an incredibly powerful tool of change. They can, argues Jonathan Klein, founder of Getty images, “change the world.” And he’s right. Powerful images have time and time again caused reactions in people, and those reactions have fundamentally changed the world. Klein gives several examples of such photos in this superb video. The first pictures of the world taken from space, for example, can be said to have sparked the beginning of the environmental movement Klein says, because they showed our plant’s “smallness and fragility.”

Of course not every organization has dramatic events to capture, certainly not as dramatic as a war or hurricane. But there are still some lessons to be learned here. Pictures cause reactions. They cause people to change their beliefs about the world, governments to change their policies, and can, in a split second, cause someone to understand the importance of what you do and, more importantly, to act. That is powerful! While you may not have a dramatic natural disaster, you do have a cause! So, how will you use pictures to get donor to act? Here are 3 ways.

Tell a story of need 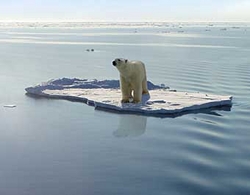 Pictures like this of a polar bear stranded on a piece of ice that has broken apart have sparked an outpouring of support to environmental organizations that are combating global warming. This is a great example of how powerful a picture can be.

Global warming is talked about in the media all the time, environmentalists throw frightening facts at us and talk about increasing levels of CO2 in the atmosphere, ice caps melting, even species dying off. But the problem really isn’t real, until we see an image like this. This stops us in our tracks. This one picture of this one polar bear is more effective than everything else. It causes people to act. That is the power of a picture! Your organization has a need. How can you best capture that need in a picture that will provoke donors to act?

Tell a story of the benefit 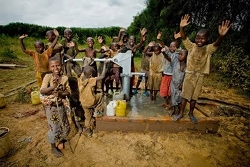 This picture was taken in Rwanda. It’s shows children rejoicing after Charity:Water helped dig a well. Pictures like this connect viewers emotionally to your mission and the critical work of your organization.

They also show the result of donating, which is incredibly important for potential donors to see and can be the driving force in getting them to take action. Of course, not every organization will be able to produce a picture like this, but they do all have a story to tell, a mission, a purpose, and people who are profoundly impacted by their work. 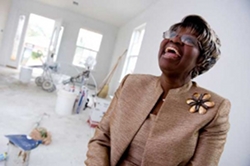 Here’s one woman profoundly impacted by Habitat for Humanity’s work and a picture that depicts it beautifully:

You can also use photos to provoke and challenge donors to take action. Check out this great one from A Child’s Right: 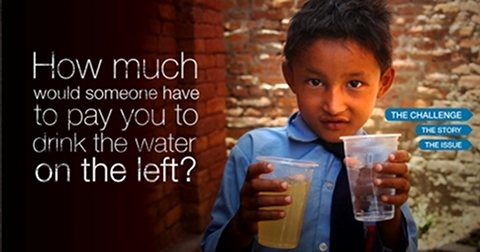 Pretty powerful, right? The image provokes donors to take action. Their first reaction when seeing this image is probably something like “No, I would never…” or “Gross…” Suddenly they realize the severity of the problem. Children like this have to drink this water everyday. They have no choice.

It’s time to get thinking about how you can use pictures to tell donors about the need you address, the impact you have, and to challenge them to act. Remember, pictures are powerful!

1. Need some help taking better photographs for your nonprofit organization?

2. Don’t have a budget for a photographer? Check out the PhotoPhilanthropy website. They connect nonprofit organizations with volunteer photographers around the world to tell stories that drive action for social change.

We’ll get you setup fast with a database you, and all your nonprofit staff can access from anywhere!