5 Hurdles Your Direct Mail Package Must Overcome to Get Opened

One of the hardest things is to get the recipient to open your direct mail package; therefore the outer envelope is of prime importance. Its function is more than just holding the contents securely; it must entice the respondent to open it.

Siegfried Vögele, a research professor of direct marketing, who used eye-tracking technology, discovered that this is how people react to the direct mail packages they receive:

1. They check to see if the letter is for them and if their name has been correctly spelled;
2. Next, they check the name of the sender;
3. Then look for any message;
4. Check the postage mark;
5. Finally, they go to the back to open the envelope and read any continuing message before deciding whether or not to open it.

Siegfried Vögele also observed that the average person spends between five and fifteen seconds scanning their mail, screening and deciding what to open, what to discard or what to save for later, all in the proximity of their wastebasket.

Generally they discard anything that is not relevant to them or not interesting enough.

There are two ways to make your package more interesting:
1. Arouse curiosity by showing or telling them something new and attention grabbing (use a teaser).

Example: the teaser in the envelope above was enough to intrigue readers to open it. When they opened it they found the answer in the brochure alongside.

2. Make it newsworthy. Tell them something they don’t know.
Example: the envelope alongside for Interval House, Canada’s oldest shelter for abused women, with the toothbrush showing and the words: “There is no time to pack when you are running away” did the trick. 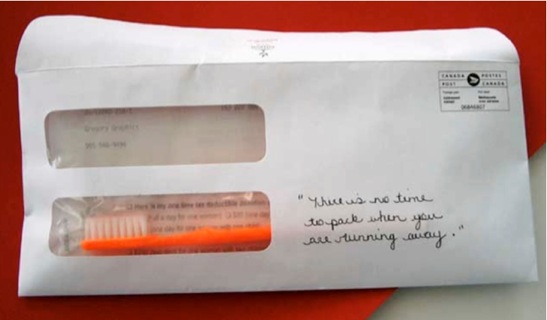 Inside, the letter informed readers that there is no time to pack even the most basic necessities of life when you are fleeing for your life. That’s how dire the situation can be for abused women.

Hurdle 2: Your envelope instantly tells them that you are asking for money

Your logo and name on the envelope instantly flags who the letter is from and what the contents are about. Most recipients can deduce that you are most likely asking for funds. While your loyal donors will most likely open the package, new or lapsed donors may not.

Another idea, if you have something for them, is to say something like: “Inside: Your copy of a Special Report on Cancer.”

In a split test in which one segment received the above envelope with only the words above, while a second segment of people received an envelope where they could actually see a part of “Special Report on Cancer” through a second window, the results of the second group increased the open rate by an additional 35%.

Hurdle 3: All envelopes from charities look the same.

Did you know that 90% of all envelopes from charities are No. 10 envelopes?

A good compromise is a 9″ x 6″ envelope since it should not cost any more in postage or production than a regular No.10 envelope and will still stand out from the rest of the mail.

Example: The 9” x 6” envelope below clearly stood out from a sea of regular No. 10 envelopes during the end of year mailings.

Fundraising Letter Templates for Every Sector

Hurdle 4: Your envelope is not engaging enough

Many packages look and feel bland with little incentive to open them.

Get them involved! One of the biggest advantages of direct mail over any other medium is that it is 3-dimensional and tactile.

A good way to keep readers engaged is by using “Involvement devices”, anything that will encourage the recipient to spend just an extra few minutes with your direct mail package.

This can be in the form of “Yes” “No” stickers, a quiz, and a puzzle, even an insert used to tell an important story like the envelope below:

To highlight the plight of refugees a piece of cardboard (see below) was inserted in the package to conjure up the image of homelessness.

Hurdle 5: Lack of imagination to capture the reader’s interest

Far too often, nonprofits gets stuck in routine and don’t spend time to think creatively about how to grab the reader’s attention.

Start thinking outside the box! Here is a great example that convey a very important message about teenage suicide: