You should send a year-end appeal because your donors are most generous during the end of the year. In fact, nearly one-third of annual giving occurs in December. And 50% of nonprofits receive a majority of their annual donations in the last three months of the year – from October through December 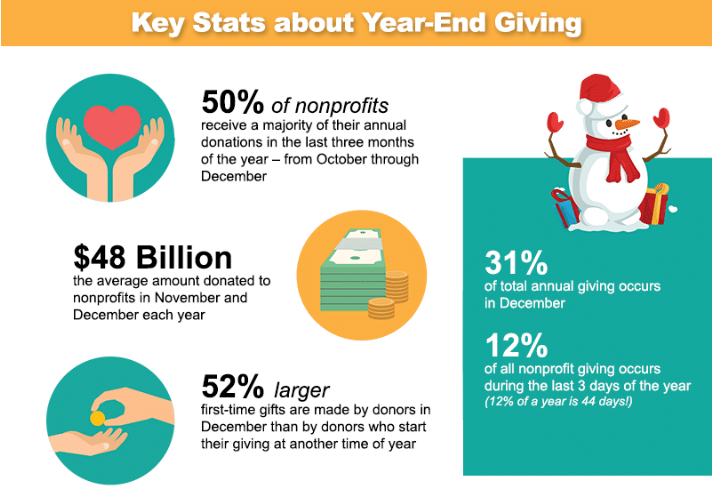 In the USA: The 2018 DMA Response Rate Report indicates that the average direct mail response rates were 9% in 2018, significantly up from 2017, when it was 5.1%. The prospect list response rate was 4.9%, also showing a big increase compared to the 2.9% it achieved the year before.

In Canada: According to Good Works: Canadian Direct Mail Benchmark Study 2020, and Stats Canada, direct mail revenues grew in 2019 by more than 5% from the previous year. And average gift amounts jumped by nearly 7%.  This indicates that while organizations’ donor lists aren’t experiencing tremendous growth (the data showed an increase of only 0.30%), the donors that do give via mail are giving more money, more often.

How to Write the Perfect Year-end Appeal Letter

Here’s a great year-end appeal example from Women’s College Hospital. Their appeal package gets everything right! 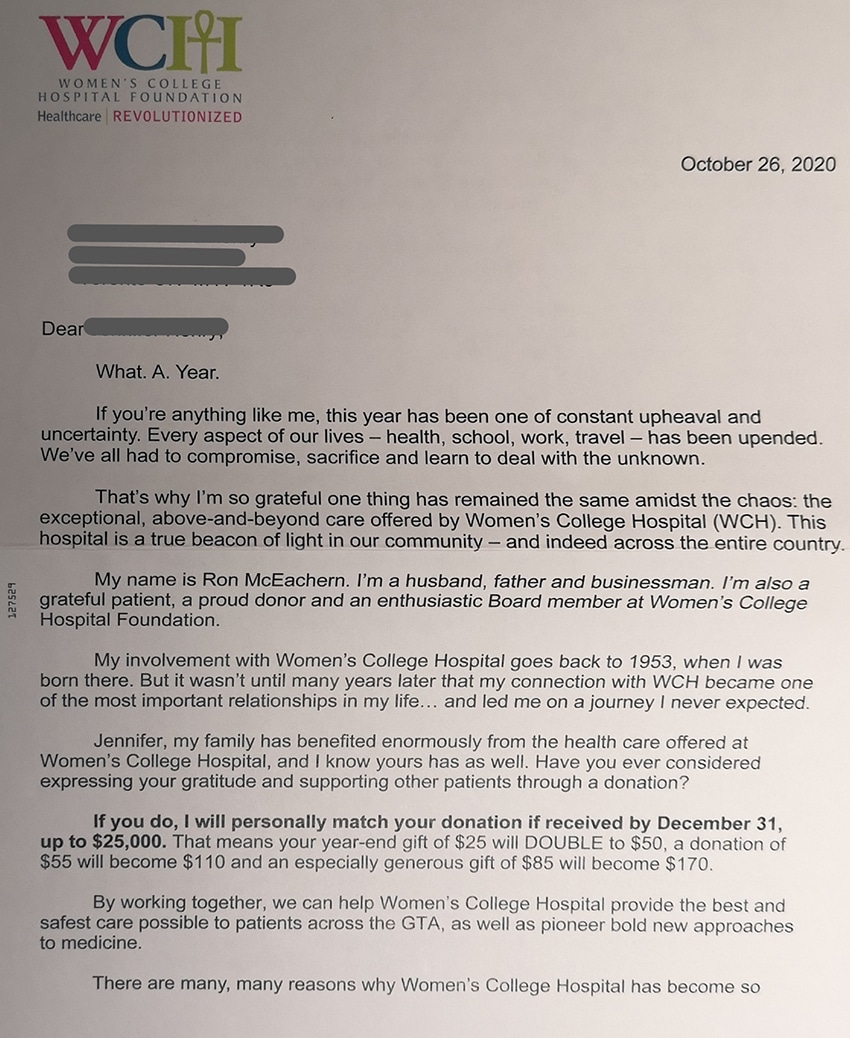 Here are some examples of successful year-end appeal letters:

This year end appeal example by Heart House Hospice generated 2.5 times more funds than what they generally receive from their regular appeals at other times of the year.

Year-end Appeal Letter Sample: Massey Center Another great example of a successful end of year appeal letter is this one the Massey Center. They sent a New Year Card to donors, but told them it was not for them.  They asked donors to sign the card and send it back, so that they could give it to their residents, young moms who have no husband or family anymore, having been abandoned by the men who made them pregnant and asked to leave the house by their parents.

Inside the card, it was signed by the entire staff with a space for the donor to sign and mail back.

The letter went on to explain why the year-end card was enclosed and how the interaction from the donors would help the residents of the charity. Namely, single mothers with no family, since they were abandoned by the men who got them pregnant and family members who threw them out of their home for getting pregnant.

The Result: Total DM revenues for year now at $13,931. Twice the amount as our regular mailings. Use these downloadable fundraising letter templates as a guide for writing your year-end appeal letter.

When to Send Year-end Appeal Letter

Here is a word of warning from fundraising expert, Pamala Grow, about stories of US postal mail slowdown:

“In my region of the suburbs of Philadelphia, some towns are reporting no mail delivery for up to five days. And when I asked friends on Facebook whether they were seeing signs of a slowdown in mail delivery, most reported that they had. Only two had seen no change.

One friend of mine, who is an executive director of a small community nonprofit in California reported “Mail is definitely slow. Had 2 donors contact me that checks were returned — address undeliverable. We’ve been there 14 years!!”

What can you do to ensure that you have your most successful year-end campaign ever? Read more. 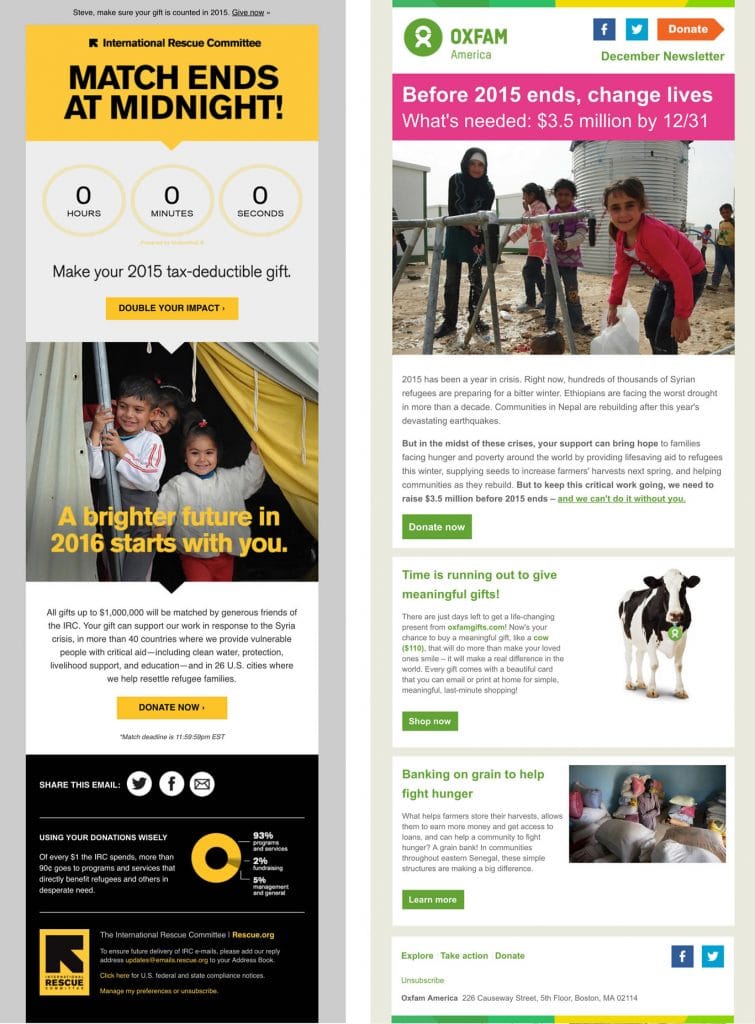 A Lesson: Direct mail year end appeals should always be followed up with email.

So, now the question becomes: How many fundraising emails should a charity send at the end of the year?

Answer: Four (at least). Yep, that struck me as a big number, too. But research proves it works. 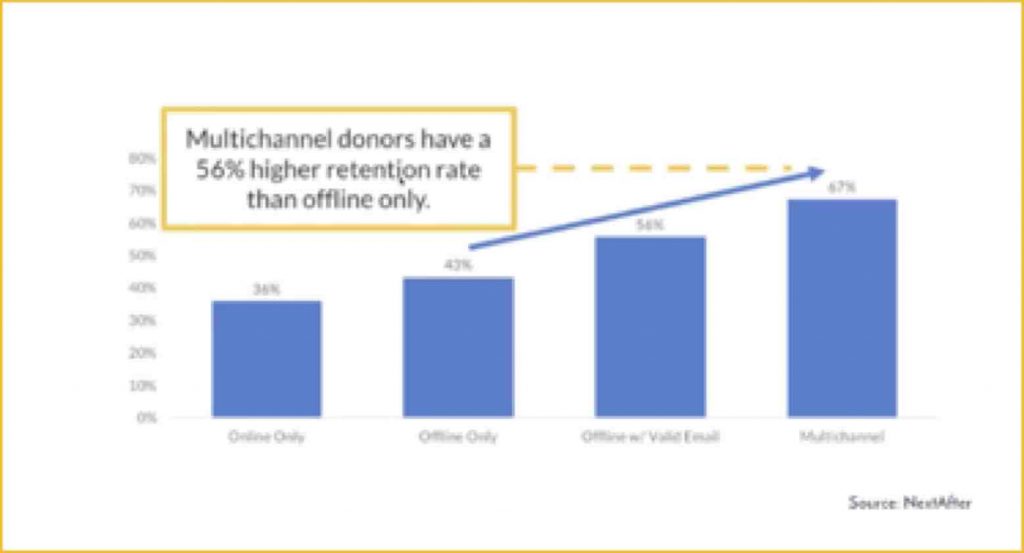 Send first end of year appeal email one week before the direct mail drop date during the week of November 2. This is called priming your donors, so they are more open to your messages.

Then, send the second email during the week of November 26. 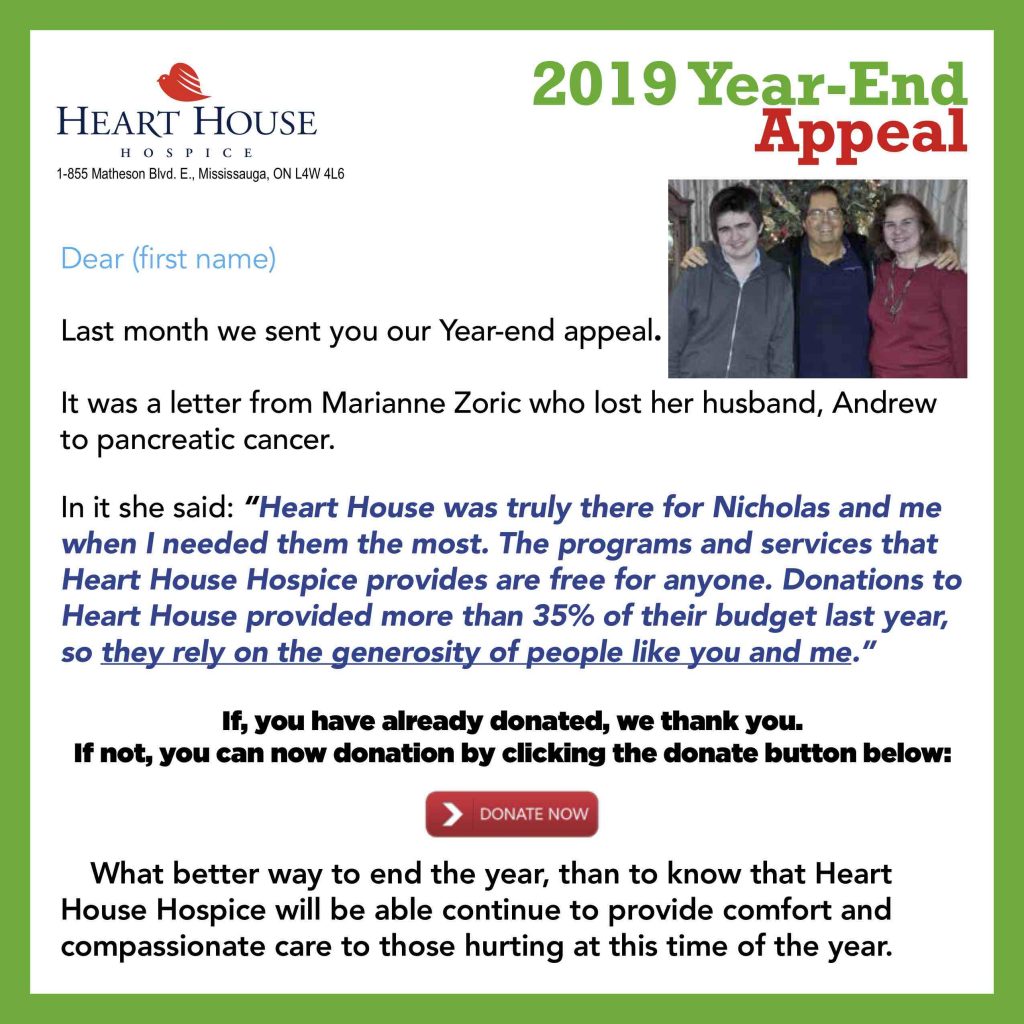 What Needs To Happen Between Now And The Drop Date

Why Use Multi-Channel Appeals for Year-end Campaign

Sending a year-end appeal letter, along with a series year-end appeal emails is going to provide the best results. As shown below, older donors give the most through multichannel appeals.

If your resources allow, you might also consider adding these to your year-end campaign:

Let’s dive into each of these a little further.

Your website is already the most efficient member of your development staff. It never sleeps, never takes a paycheck, but at the end of the year, your website needs special attention in sync with the year end appeal launch, so, you need either to:

Social Media allows you to reach supporters who prove to be most share-worthy, so they can spread your end of year appeal message. Propose creating a video to add to Facebook and other social media sites.

Need help funding a digital ad campaign to support your year-end fundraising campaign? Check out: Google Ad Grants for Nonprofits: Everything You Need to Know.

Direct Mail: Start by obtaining postal indicia and with creative concepts in first week of October so that approval and final files can be accomplished by early November. Emails: Simultaneously plan for the 4 emails so that they are ready to drop by the proposed dates. Website: Consider creating a dedicated page once the Creative has been finalized in October Social Media: Consider adding a video once the Creative concept has been finalized in October. Here below are two examples.

Charities can strengthen the emotional reward of impulsive giving by reducing the delay between the donation and the positive feelings it produces. Charities should immediately and vividly show donors the effect of their gift.

An organ donor organization teamed up with the local police who gave those motorists, who were caught for any minor offences, no ticket if they were organ donors because they as organ donors had pledged to give others a second chance in life. Watch here.