Demystifying Mobile Giving: How it Works and Can Work for Your Nonprofit

Mobile giving gained recognition following its incredible success at raising funds for the victims of the Haiti earthquake in January 2010. The Red Cross alone raised an astounding $32 million when more than 3 million people texted the word “haiti” to make a $10 donation. That success has since spurred an interesting discussion about the potential that mobile giving has as a fundraising tool going forward.

Now, obviously we cannot expect to replicate this kind of success. These were unique circumstances: an extremely large organization operating with huge amounts of funding, and help from the press and celebrities. But is there some use for mobile giving for smaller organizations? Now that’s an issue worth exploring! This article cuts through the hype to see mobile giving for what it is: a unique tool with a great deal of potential.

An in-depth Look at Mobile Giving

With mobile giving, it isn’t just you and your donors anymore. There are three other key players that are involved:

Application Service Provider (ASP). The ASP serves as your primary point of contact for your campaign. The ASP will help you design your campaign, deal with the Cell Phone Provider to arrange a short code (a five or six digit number) along with a keyword (like “aid” or “give” or “haiti”), and assist you in handling incoming and outgoing messages. They will also deal with the Trusted Third Party (TTP) on your behalf to arrange a contract. There are many ASPs to choose from: Mobile Matters, Causecast, andTextCaster just to name a few.

a. donations made through a Cell Phone Provider actually go to a legitimate tax-exempt non-profit organization, and

b. the Cell Phone Provider credits charities appropriately for donations made on their behalf. [definitions were taken from: Verclas, Katrin. Texting for Charitable Dollars: The Definitive Guide to Mobile Fundraising. April, 2010. ] 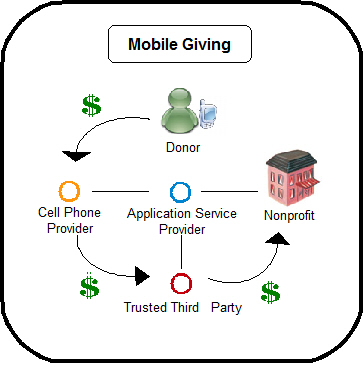 Here is a break down of how a mobile donation makes it from the donor to the non-profit: Donors see a call to action at a live event, on a billboard, Twitter, Facebook, or any other form of marketing. They text a keyword like “Give” to a short code like “55555” to donate $5 or $10. The charge then shows up on their next phone bill. Once the Cell Phone Provider collects that money, they pass it onto the TTP. The TTP in turn passes it on to the non-profit itself in full.

Cost for the Non-profit

A common misperceptions about mobile giving is that it is expensive and that only a small percentage of what is raised actually goes to the non-profit itself. We had the pleasure of speaking to Andrew DellaPietra, the founder and CEO of Mobile Matters, an ASP that also offers mobile services to follow-up and engage with your supporters. He explained the fees as follows:

Besides a one time fee which ranges from $350-$500 to set up a contract with the TTP, the ASP generally charges 3 sets of fees for the service. Here is what Mobile Matters charges:

Collectively, the messaging and transaction fees total approximately 8%, so non-profits actually end up seeing 92% of the donation, and with an annual commitment of $4,200 ($350 x 12 months), a nonprofit would need to get 420 $10 donors to break even in any given year.

Beyond Haiti: Mobile Giving for Small and Mid-Sized Non-Profits

Now that you know exactly how mobile giving works, you can get a better handle on how you might be able to use it in your organization. Without celebrities and national networks on your side, the biggest challenge will be getting the message about your campaign out there.

Gaining visibility for your campaign, however, is not a new challenge or one that is limited to mobile giving. Like any campaign, the success of a mobile giving campaign depends largely on strategy. Think about where the opportunities exist for your organization to reach people, particularly new supporters. Here are some ideas:

Maybe you’re hosting a live event, or have the opportunity to speak at a city festival or concert where you have a large audience. If so, use this opportunity to call on people for support. With mobile giving, supporters can act immediately right at the event while they are thinking about the cause.

Find an Opportune Place to Spread Your Message

If you don’t have access to large numbers of people through live events, there are other options for reaching new supporters. Be creative and work with what you have. For instance, let’s say you run a community centre that is falling apart and requires funding to stay in operation, you could use the side of the building to spray paint the following message to the public: “Save our community centre. Text ‘save’ to 90909.”

The Salvation Army is using mobile giving to supplement it’s Red Kettle Christmas campaign this year. It’s quite ingenious really. They will be able to reach thousands of people walking by in malls who don’t always have cash on them, but certainly have their cell phones!

Create a Buzz with Social Media

One of the biggest concerns with mobile giving is that, besides a mobile number, donor information is kept anonymous. ASPs, however, can help you do a lot with that mobile number now to engage supporters, even getting them onto your website to provide additional information.

Also, with donation amounts currently capped at $5 and $10 by the CCP, the worry is that donors who might have given a whole lot more, might feel like they have done their part by texting. For the most part, however, mobile giving shouldn’t take away from your current supporters. It should instead be used as a way to tap into a whole new group of supporters; supporters who are younger, on the go and willing to support if they can give $5 and $10 immediately and anonymously.