Being able to influence people is an important tool for any non-profit. Whether you’re looking to influence people to donate money, volunteer their time, attend an event, purchase a product, or even just to care about a particular issue, the 6 principles of persuasion can help!

These 6 ways to influence people were first put forward by Robert B. Cialdini in his 1984 book called “Influence: The Psychology of Persuasion.” These 6 principles of persuasion have been used for decades by businesses, politicians, and marketers alike, to influence people to do something. Today, if you read any book or take a course in marketing, it will no doubt include these 6 principles in one way or another: 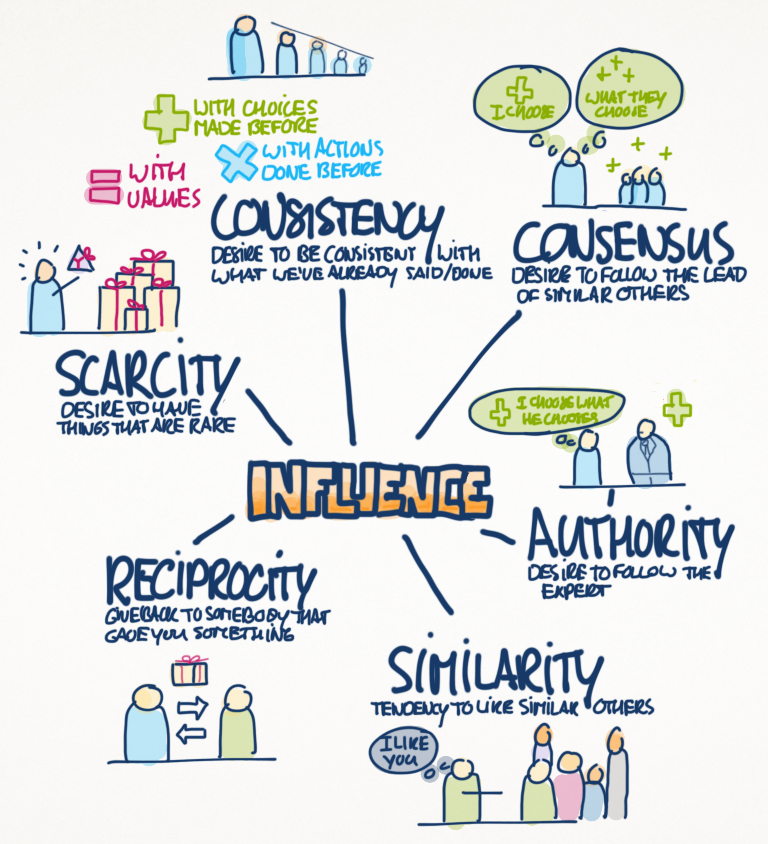 Similarity is about trying to connect with people (as authentically as possible) in a way that they can relate to and identify with. This principle is all about safety in numbers, because people feel validated and are more influenced by something or someone they observe to be relatable or similar to them. For example, in order to recruit volunteers, you might tell the story of someone who will be relatable to your target demographic, and who volunteers a few hours a week. People who identify with this person (even if its just having a similar age, interests, occupation, or story) will think, “they’re just like me, maybe I could volunteer a few hours a week too.”

People want to commit to things that are aligned with their values, and people have a deep need to be seen as consistent. Once we have publicly committed to something or someone, we are so much more likely to go through and deliver on that commitment… and do it again. This can be explained, from a psychological perspective, by the fact that people establish a commitment as being in line with their self-image. A classic example of this is when people publicly identify as supporting a particular political party; they are far more likely to vote for that political party over and over again.

You can use consistency to your advantage too. For example, instead of asking someone for a one off donation of $60, ask them to donate $5 a month over the course of a year. After a few consistent donations, they will then begin to align their identity with the work of your organization or your brand, and chances are they will continue to donate after that 12-month period.

This one might seem obvious, but people really do have a tendency to believe someone they trust, or people who have authority. Whether it’s a local hero, a celebrity, or a politician, the average person will accept what a figure of authority says without really questioning it. Using a figure of authority to deliver your message, rather than having it come directly from you, is a great way to influence people.

This can be as simple as aligning your message with that of an authoritative figure. For example, find a quote from a celebrity that relates to the work you do, and share a graphic with that quote, so people will associate that authoritative figure with your work, and they will be more influenced to support your work. If you can create a graphic with your non-profits colors/style, it will help people align this message with your brand even more.

Simply put, people want to be part of the majority, not the minority. When people are surrounded by others who are all doing something, they want to reflect that. Peer to peer fundraising is an example of consensus. Because people want to share something similar with the people they like or associate with, they will be easily influenced to support a cause that their family, friends, or colleagues also support, especially if by not supporting it they will be part of the minority.

Human beings are wired to basically want to return favours and pay back our debts: to treat others as they’ve treated us. Reciprocity is what creates a real connection between you and your supporters. So sometimes, you have to give a little something to get a little something in return. It doesn’t have to be anything extravagant. It’s enough, for example, to simply tell people that in return for their skilled volunteering you will offer them a great reference letter.

When people believe something is in short supply, they want it more. Humans want something more when its availability is perceived to be limited, so human behaviour is such that we are likelier to purchase something if it’s the very last one or the special deal will soon expire. Telling your supporters that there are limited tickets to an event, or only a few volunteer roles left to fill will have them feeling like they’ll be missing out on something if they fail to act quickly.
1,2,3